Welcome to my Fireside Chats. Here, I hope you’ll be able to get to know some entertainers on a personal level, peek into their minds, see them as friends. 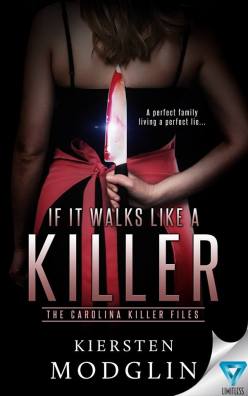 I’d like you to meet Kiersten Modglin, up-and-coming author of the newly released thriller novel If It Walks Like a Killer from Limitless Publishing. Even in the short time the novel has been on shelves, the response from readers has been overwhelmingly positive, and I think it’s safe to say that Modglin won’t be a one-hit wonder.

So, Kiersten, right off the bat, where’re you from?

Oh goodness, a little bit of everywhere! I grew up in small town Western Kentucky, lived in Wilmington, NC for a while, then in Nashville, TN for a few years, and now I’m living in a tiny, tiny town in Southern Illinois. I’m a traveler by nature and love exploring new places!

What exactly inspired the small-town setting of If It Walks?

I’m from Oklahoma suburbia, so I know exactly what you’re talking about. What was your favorite part of If It Walks to write?

I loved writing the “big scene” near the end where the truth comes out. Before I ever put pen to paper, that scene was the first part of the story to ever come to me and so it was really exciting to finally get to put it out there and let it all play out. I still remember how much adrenaline I had writing those final scenes. I had really put it off, just knowing it had to end but not wanting it to.

There’s no better feeling. To quote Buster Keaton, “I always want the audience to out-guess me, and then I double-cross them.” What has been your favorite part of being/becoming a published author thus far?

It’s a huge tie between seeing my cover for the first time and finally opening that box and seeing all of my books just laying there, full of potential, and waiting to be read. I teared up a bit both times. I’d dreamed of those moments, so when they finally came it was truly unreal.

Are you currently working on any new projects?

I am! I have two new books coming out in November that I am getting ready to begin edits on. I’m also working on my fourth book, which should be done very, very soon. I’m hoping it will be released in early 2017.

Wow, busy! I’m personally looking forward to your future works! You’ve mentioned that you focus your writing on the darker side of psychology. What are some of your favorite works that explore the darkest parts of human nature?

Gone Girl by Gillian Flynn is the first one that comes to mind– I admire Flynn’s style so much. Her books show people, particularly women, in a way a lot of things won’t. She isn’t afraid to show how dark and totally evil women, and people in general, can be.

I love anything and everything by Mark Edwards or Jodi Picoult– their novels are always darker than they seem because they make you realize how messed up humans really are. They show that real people can respond in truly horrible ways, depending on their circumstances.

I’m also a huge sucker for The Walking Dead. While yes, it’s about zombies, I feel like it’s about so much more. When faced with a zombie apocalypse and the literal end of the world, it usually ends up that humans are the ones the heroes have to fear the most…not monsters. I think that says a lot about the world and us as humans. I like movies and TV that have an underlying message. It’s also just a really, really fun show.

No judgment here. TWD is quality storytelling. So what storytellers have inspired you?

Gillian Flynn, Jodi Picoult, Mark Edwards, JK Rowling, Elizabeth Haynes, D.M. Pulley, Holly Brown, and of course Stephen King. The list goes on and on. If you can weave drama into a story filled with suspense and a great ending, I’m sold. These authors do it flawlessly.

Nice! Who would you cast in the film version of If It Walks?

Okay, I’m not even going to pretend I haven’t thought of this!

Caide- I go back and forth between Jason Bateman and Ryan Reynolds— their talents in suspenseful works are seriously underutilized!

Hampton- Tony Goldwyn (at the suggestion of a fellow author, but lets face it– he’d be perfect)

Excellent choices. I love Bateman and Reynolds, and I don’t mean to brag, but I’ve met Tony Goldwyn. He’s a good guy.

So what’s one of your favorite movies from recent years?

Room, starring Brie Larson. It’s based on a novel by Emma Donoghue. One of the best books and movies I’ve seen or read in a long time.

Love it. Jacob Tremblay deserved an Oscar. Do you have a personal philosophy about writing or storytelling?

I think it’s important to just be honest with your readers. You can’t force it. If you don’t believe in the story you are telling, your readers will be able to tell. I also think it’s important to write like no one will ever read your book…sometimes the things that need to be said, they’re just plain hard to say. I found myself worrying about what people would think of different parts of the story, but in the end, I just had to tune that out and write. If you aren’t true to yourself, and to your story, it will show. I just have to remember, its not me saying and doing the actions, it’s my characters. They truly have minds of their own.

Excellent! Thanks for talking with me, Kiersten!

Check out If It Walks Like a Killer on Amazon or BarnesandNoble.com! Personally, I greatly enjoyed it. It’s certainly a crime mystery, but it also has a heaping of legal thrills, real-life drama, and, most of all, genuine emotion. Rachael, Hampton, Caide, Blaire… Every character contributed to the web. I honestly didn’t know who was telling the truth, and I frantically turned pages to find out what happens next or to learn a new juicy nugget of backstory. As soon as you think you know where the story is headed, a curveball changes the game. The climax was unexpected but inevitable–just as it should be!